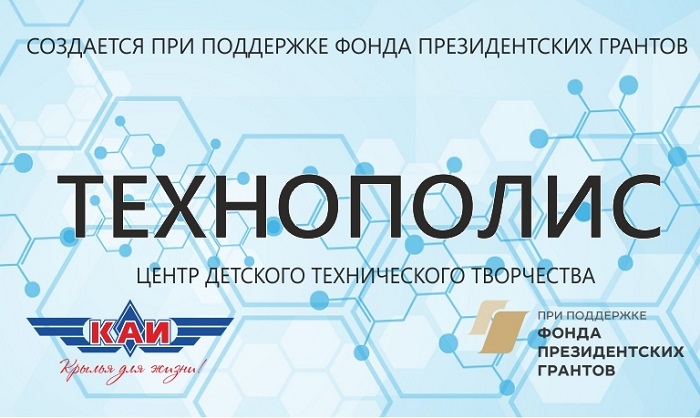 We invite employees, students and graduates of KNRTU-KAI, as well as everyone who wants to develop scientific and technological creativity, to join the project of the educational complex - “Technopolis”.

“Technopolis” is an interactive space that integrates various forms of additional education for pupils in the field of physical-mathematical sciences, engineering and technical creativity.

1. The world's only interactive educational center for aviation and technology based on the first supersonic passenger aircraft Tu-144. It consists of an airplane itself, a building adjacent and specially designed area. Inside the complex, there are four theme areas: aircraft engineering, helicopter engineering, engine design and space activities, there also a retro-display hall, an interactive cockpit, and an aerospace quantorium.

2) The Engineering Lyceum Boarding School of KNRTU-KAI. The mission of the lyceum is to educate future technological leaders of the 21st century, fostering their physical and emotional health. The Engineering Lyceum has also the project area of ​​about 800 sq. m., equipped with the most modern devices, which allow young scientists to implement any high-tech initiatives.

3) The Science and Technology Laboratory “Technarium” will be located in the center of Kazan, right on the bank of the Kazanka River (the former ski lodge of KNRTU-KAI). “Technarium” is the place for the practical classes in field of design and construction of actual gliders, unmanned aerial vehicles, river and sea-going vessels, their engines, navigation and control systems. During their design and implementation, the most modern technologies of the XXI century, such as digital, composite, additive and quantum technologies will be used. “Technarium” is expected to be the new version of the well-known student design bureau KAI-1, which was popular in the Soviet period.

The goal of the “Technarium” is to develop cognitive interests in technical creativity and aeromodelling: to create the necessary conditions for formation of human behavior.

During their training, pupils has the opportunity to obtain a profound knowledge of the basics of aerodynamics, aviation technology and modelling. Moreover, they can learn to read blueprints, acquire communication skills during their classes in the laboratory and different competitions as well.

The project is being established with the support of the Presidential Grants Foundation.

KNRTU-KAI celebrated its 88th anniversary on a large scale in fun, competitive way with traditional games and amusements.

“For as long as I can remember, I’ve enjoyed mathematics”

“These children are the gold reserve of our country”

The Mayor of Kazan visited the Engineering Lyceum-Boarding School of KNRTU-KAI.

“I want to become an inspiring teacher”

Check out our latest Interview with Rosalia Gabdullina, the finalist of the “Candidates Pool” competition.

Check out our Interview with the Eco-KAI project manager Anna Bolysheva.

Students Day at the ice rink

KAI celebrated the Students Day at the ice rink in the Park Black Lake.