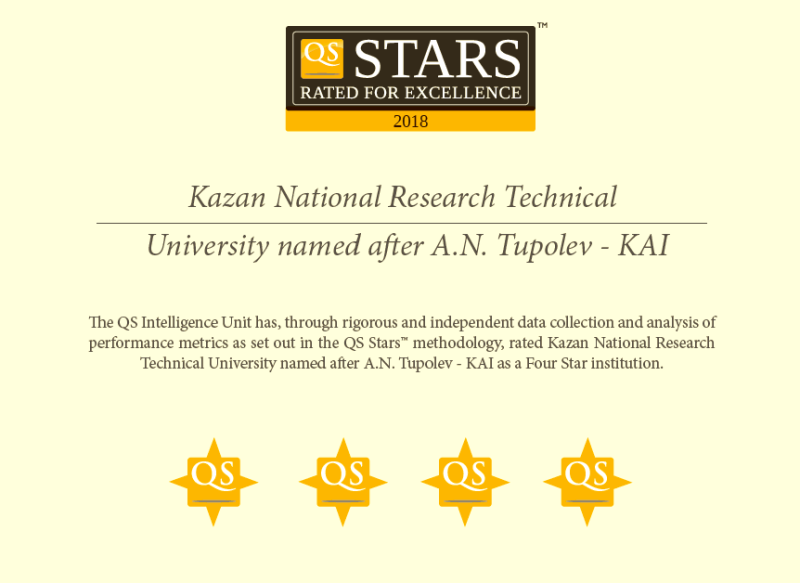 Innovations, Inclusiveness and Employability were rated as the highest 5 stars among the total 7 categories that are assessed.

QS Stars University Ratings provided by QS Quacquarelli Symonds company allows students and educational experts to get holistic impression about institutions as much as possible. Unlike other rankings, where universities rank in a general table depending on the number of points scored, in the QS Stars ranking, universities receive a fixed score from 1 to 5 in a number of areas - from the quality of education and research to the development of sports and social infrastructure and accessibility for persons with disabilities.

For the following categories included in the total amount of points, KNRTU-KAI received:

(for BSc in information systems and technologies): 3 stars

QS Stars is a rating system that provides a detailed look at an institution, enabling you to identify which universities are the best in the specific topics that you care about, program strength, facilities, graduate employability and more.

In the methodology used for QS Stars, universities are evaluated by dozens of indicators which are grouped in several categories. After the assessment, universities are awarded with an overall Star result which ranges from 0 to 5+ Stars, depending on the number of points achieved through the evaluation.

Yesterday, the Opening of the III GRIAT Summer School on IT...

In a friendly atmosphere, seven students got acquainted with each other and the organizing staff told about themselves and their...

Associate Professor of KNRTU-KAI Became a Co-author of the Unique...

Dr. Svetlana Shavaleeva, Associate Professor of the Department of General Chemistry and Ecology of KNRTU-KAI, was one of the...

Today, the Cabinet of Ministers of the Republic of Tatarstan held a briefing on the “Admission Campaign at Universities of the...

KNRTU-KAI Project is Among the Winners

The Ministry of Science and Higher Education of the Russian Federation summed up the results of the competition for the...

KNRTU-KAI, together with the Nanjing University of Aeronautics and Astronautics, is launching a Double Degree Program.

On May 20, the 14th International Helicopter Industry Exhibition “HeliRussia-2021” took place at the Crocus Expo IEC.

KNRTU-KAI Confirmed the Status of the 1st Category University

A team of experts evaluated the impact of activities of Russian research and educational organizations.